Paper of the week 27.02.19: Has the NHS Long Term Plan forgotten we are all going to die?
For privacy reasons SoundCloud needs your permission to be loaded.
I Accept

Reference: Has the Long Term Plan forgotten we are all going to die?

This week’s paper of the week is brought to you by Professor Sir Muir Gray, 3V’s Founding Director.

Bottom line, chosen by Muir from the paper

Increasingly, people endure slow deaths of frailty, often with dementia in the final years. Increased life expectancy is generally regarded as a cause for celebration, but many people fear dependency and dementia more than they fear death…

Between a quarter and a third of health-care expenditure is for care in the last 6 months of life. However, we don’t know how much of that money is well spent. There is undoubtedly over-treatment at the end of life, and half of people in the UK die in acute hospitals, which are often a poor place to die. Evidence suggests that palliative care leads to both better care and reduced costs.”

In thirty years we have gone from the underuse of medical treatment for older people, as a result of ageism, to overuse as a result of failure to think about, find out and act upon the outcomes that matter to the people we call patients. Much attention has been given to polypharmacy, and rightly so because significant reinvestment could be made from the drug budget to the DNCA budget, the District Nurse and Care Assistant budget (1DNCA =£76,000). Much less attention has been given to the last year of life although good work has been done by the Gold Standard Framework to ensure this issue is raised and discussed in care homes.

Firstly the priority should be to compress and minimise the period of dependency at the end of life by preventing or delaying the onset of disability, dementia and frailty, and NICE guidance emphasises that this is possible.

Secondly we should try to minimise the unnecessary admission of people to hospital and the NHS Atlas of variation showed just how great the unwarranted variation. 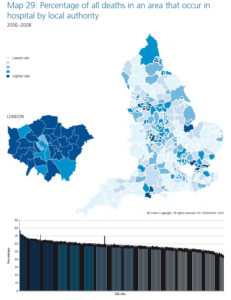 Thirdly we should ensure that the clinical strategy for an individual should recognise the need to decide on the best clinical strategy for people in the last year of life to optimise value from there resources available, not to save money but to optimise personal value. Surprisingly, to some people, a move to palliative care not only uses less resources, it need not result in an earlier death as this important trial demonstrates.