Paper of the Week: Optimality in cancer redefined for the 21st century

Paper of the Week: Optimality in cancer redefined for the 21st century
For privacy reasons SoundCloud needs your permission to be loaded.
I Accept

This weeks blog is brought to you by: Sir Muir Gray, Founding Director

“I’ve always had a peculiar fascination for the receiver-operating characteristic (ROC) curve. As a researcher, I appreciate that the area under the curve can be precisely mapped, so that different screening or diagnostic tests can be meaningfully compared.

This lovely interweaving of my clinical and academic perspectives took an unexpected turn just over a year ago, when I was diagnosed with breast cancer.

…. So while these setbacks — and their sequelae — didn’t necessarily threaten my life, they certainly threatened my days. These threats combined forces to become my lived “reality of cancer,” which was at times exhausting and overwhelming. For me, grasping this entity, defining its boundaries, seemed key to disempowering it. So I nailed it to a curve (see graph). 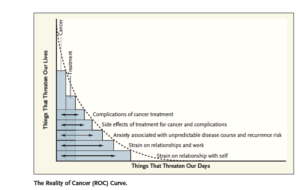 The y axis represents the obvious threat to life imposed by cancer and its treatments. But the x axis represents the things that threaten to steal our days: treatment and its complications, side effects, disruption of work and relationships, the sense of vulnerability, the fear that we may be losing our identity. The area under this metaphorical curve is the answer to “How are you doing . . . really?”

My ROC curve maps out what I’d found hard to define and measure. It is strangely empowering to articulate these threats both to my well-being and that of my patients — to plot them sensitively and specifically.”

Bottomline – Donabedian’s curve of optimality remains as relevant today as it did in the 1980’s when he developed the concept. It has formed the basis of all value work since then; Harvard for market-based healthcare; 3V’s for population health. In this paper the author uses Donabedian’s approach to think about optimality in cancer; the paper’s conclusions could equally be applied to personal and population value.”

For decades clinicians and managers have been at loggerheads thinking they are in conflict but the management of resources for individuals and for populations are two sides of the same coin.

To people who mange resources the Donabedian diagram is the single best expression of the fact that as investment increases the balance between benefit and harm changes. Life consists of trade-offs 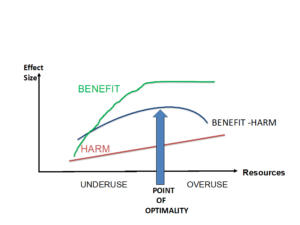 So too with clinical decisions whether made by the person called the patient or the person called the clinician and when the patient is also a clinician they can express this in a diagram in which the benefits and the costs, in the case of the individual personal costs are also traded off against one another and too often the personal costs are not measured or even discussed. Here is how the relationship changes. 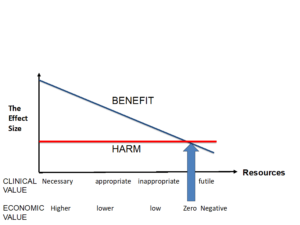 For the individual, as this highly skilled individual shows us in this article, the trade off between potential benefits and real costs can also be expressed diagrammatically and this curve will also change as the amount of resources invested by the population in a particular system of care increases, not necessarily favourably for every individual.